Japanese kitchen knives have had this reputation of being durable and extra sharp, with a look that speaks of well-thought craftmanship and durable steel. This is why most chefs and butchers dream of having one or two pieces of Japanese knife artistry as part of their collection or as part of their regular butchering kit, taking, for example, the Shun DM0743 Classic Gokujo Boning and Fillet Knife.

It is said that the making of Japanese knives is passed from one master to apprentice and so on and that the techniques used in modern Japanese knife making are derived from samurai-sword making where hot steel is folded over and over again until it forms a single unit of hard steel. If this were true, then it would mean that modern Japanese knives are the result of centuries-old mastery of molten steel and are truly deserving of its notoriety.

Chefs and butchers like Japanese knives because of their precision cuts and high resistance to chipping. The layering of hard steel over and over in the foundry also gives it extreme durability while maintaining a simple profile and a lightweight. 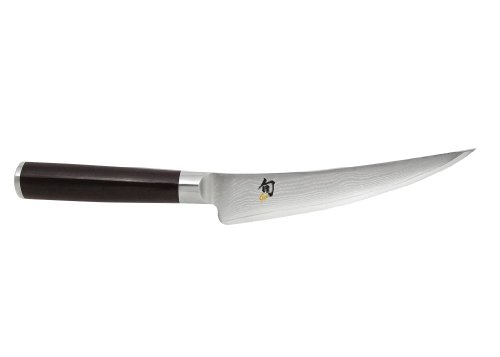 The Shun DM0743 Classic Gokujo Boning and Fillet Knife is a good example of simplistic design meeting functionality. It can be used for either boning and trimming, or both, with its extra sharp edge and non-slip handle. The narrow, curved blade is ideal for boning as it gets close to the bone, making it easier to separate from the meat. The same blade is sharp enough that it reduces drag as you cut along the meat for trimming. The strength of the blade, true to its Japanese origins, is flexible enough to glide through the fish, effectively removing skin and bones in one go.

The Shun DM0743 Classic Gokujo Boning and Fillet Knife comes from a long line of high-quality cutlery and is the knife of choice for many chefs and butchers around the world. Here are some if features:

The core of the Shun Classic Gokujo knife is made of proprietary VG-10 high-carbon steel, which is Japanese super steel known for its excellent edge retention

The inner VG-10 core of the knife is clad with 16 layers of SUS410/SUS431 Pattern Damascus stainless steel on either side of the blade. This material is resistant to rust and corrosion, and it is also easy to maintain

The blade of this knife has a 16-degree angle, making it one of the sharpest knives around as most traditional European blades are sharpened at 20-22 degrees

The ebony-colored pakkawood handle of this knife is made of resin-impregnated hardwood which is NSF-certified for a commercial kitchen. The D-shaped handle also provides excellent grip as it fits in the palm perfectly.

The Shun knife has a Rockwell Hardness rating of 60-61, this means that this knife remains sharp far longer than most commercial knives.

Get it now on Amazon

The Shun DM0743 Classic Gokujo Boning and Fillet Knife makes a great addition to any knife arsenal, with its Damascus-clad, VG-10 stainless steel core that gives it wonderful strength and flexibility and an edge that never seems to get dull. The D-shaped pakkawood handle is a little daunting at first, but it fits perfectly in your palm, and you will feel the knife becoming a part of you, with every motion targeted to cut precisely and accurately.

The features and performance of the Shun DM0743 Classic Gokujo Boning and Fillet Knife have been compared to the Wusthof Classic Fillet Knife. Aside from looking a lot like the Shun boning and fillet knife, the Wusthof fillet knife comes with a longer blade at 7 inches and synthetic handles that promise a non-slip grip.

The blade of the Wusthof fillet knife is made of high-carbon steel that is precision-forged with stain-resistant alloy. Its blade comes as a result of precise tapering, stemming from numerous grinding and polishing procedures.

While both the Shun DM0743 Classic Gokujo Boning and Fillet Knife and the Wusthof Classic 7-Inch Fillet Knife can be used in boning and filleting fish, meats, and poultry, the clear choice between the two is the former.

The traditional way of making Japanese knives have outclassed the European way this time with its strong core and stylish cladding, as well as a blade that rarely gets dull, even after excessive use.

The Shun boning and fillet knife also has a better handle that grips no matter what and feels more solid than the Wusthof fillet knife. While using and maintaining the Japanese knife can take time to master, the output that it can produce is worth all those nicks and some bloodshed.

Traditional Japanese knives are now more visible in the market, especially with the reputation that it has built which is centered around high durability and great flexibility. The Shun DM0743 Classic Gokujo Boning and Fillet, 6-Inchis a fine example of this craftsmanship, and its simplistic design hides the fact that this blade is worth everything you put in to master it.

Shun Classic vs Premier Knife: What is the Difference?

Shun Classic vs Premier Knife: What is the Difference?